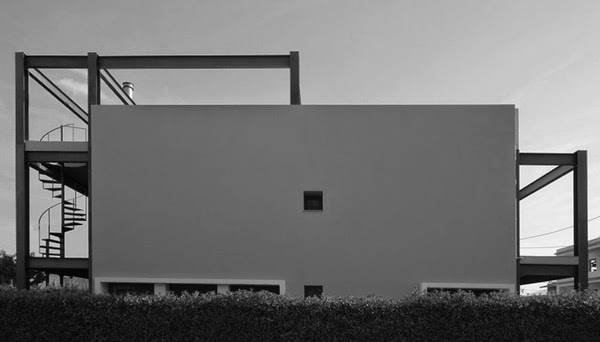 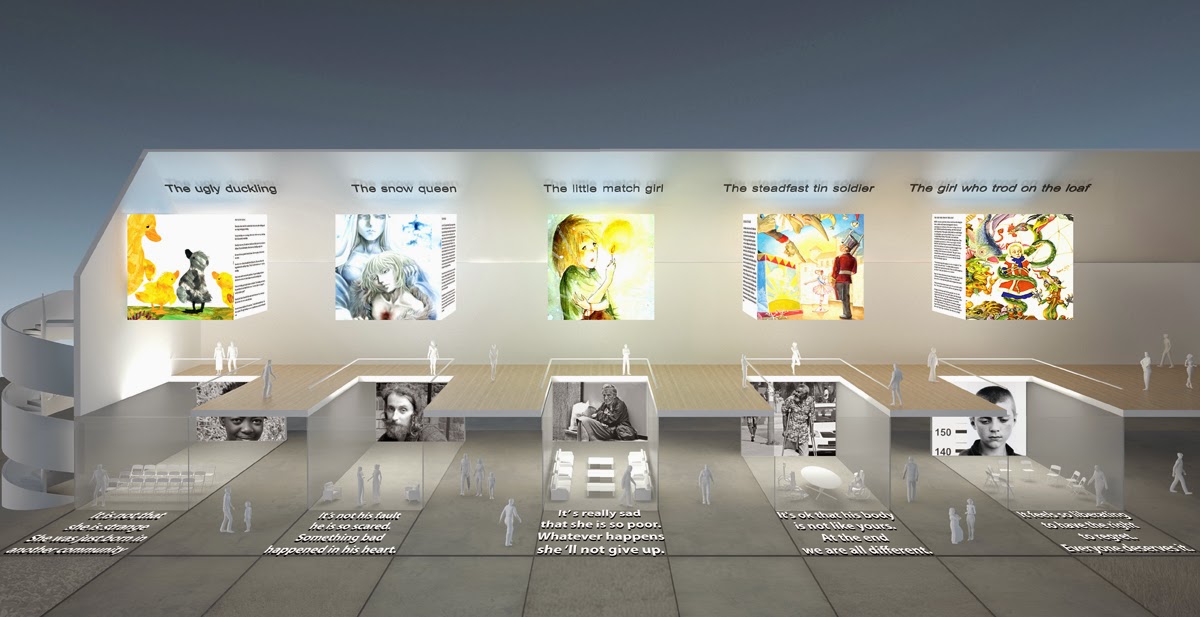 ‘Andersen’s fairy tales are talking to us about real life.’

This is the concept of the House of Fairytales.

The world of Andersen's fairy tales is the real world reversed. Andersen's great stories are inspired from everyday life and their purpose is to help us see the real world with new eyes. His stories make us rethink our values, redirect our energy, revalue our priorities and reconsider our actions. Hidden messages regarding major social issues of his era lie behind Andersen's tales, but at the same time his writings have a lot to say about contemporary social concerns.

The main idea of our proposal is a reflective interrelation between everyday life and the imaginary world of Andersen’s tales. We propose a museum which consists of five units each one of them critically associating a well-known fairy tale with a major social issue. Five ‘Fairytale’ spaces are linked to five ‘Lifetale’ spaces:
i. The ugly duckling / center for immigrant children integration.
ii. The snow queen / youth mental illness center of support.
iii. The little match girl / full-day caring center for children in poverty.
iv. The steadfast tin soldier / service center for people with mobility impairment.
v. The girl who trod on the loaf / rehabilitation center for juvenile offenders.
On the ground level five prismatic glass boxes, the five ‘Lifetale’ spaces, form the base of the museum as if the real world supported the world of the fictional stories. In the higher level one finds the main exhibition areas of the museum organized around the five ’Fairytale’ spaces. Each  ‘Fairytale’ space is connected with its relevant ‘Lifetale’ space through an open atrium. This particular architectural structure helps visitors associate the content of each story with a present-day tangible social issue. This loop between the real and the imaginative is what makes this museum one of its kind by paying homage to Andersen’s world in the most radical way. 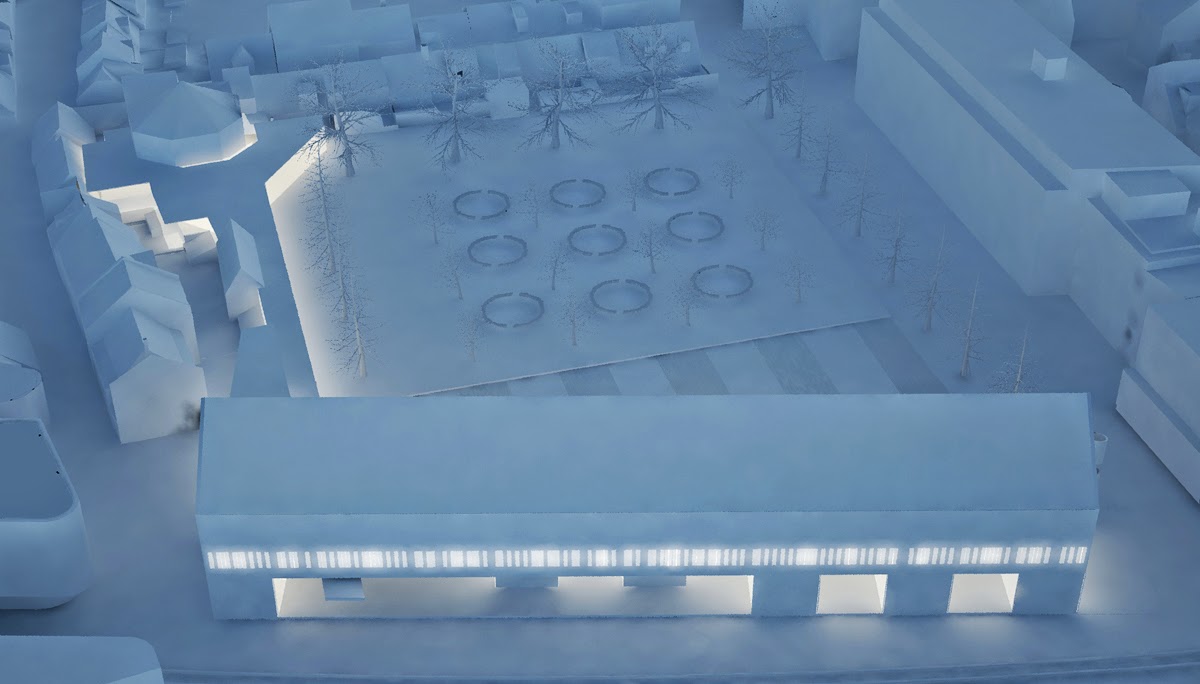 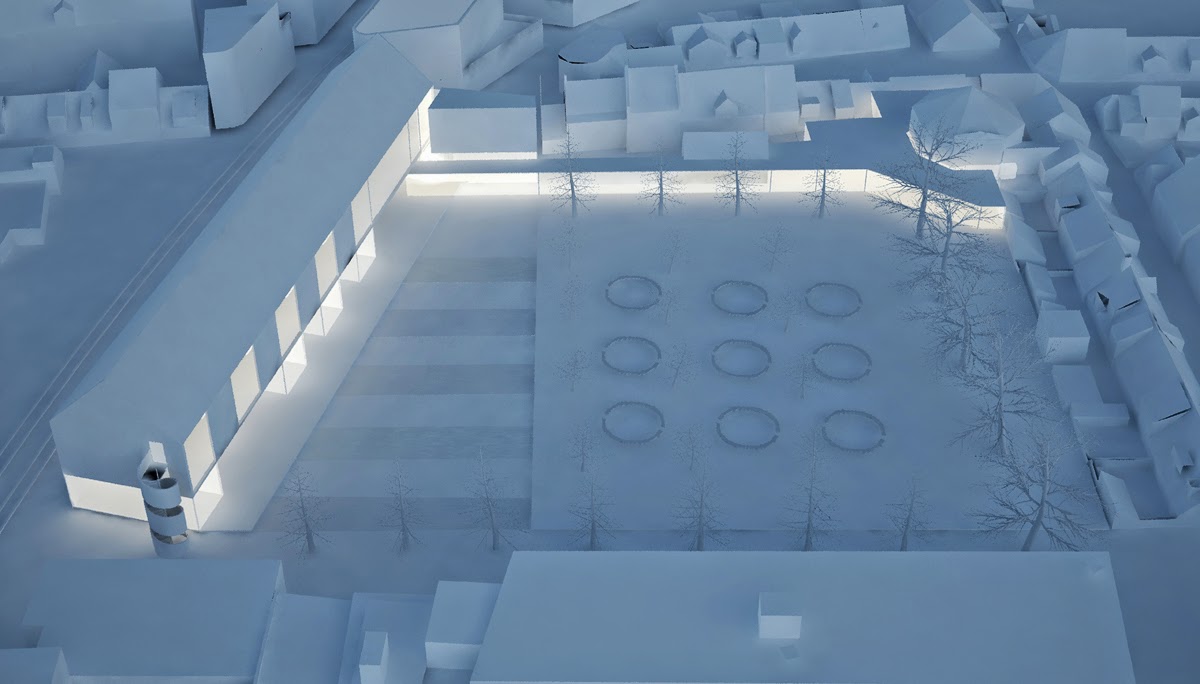 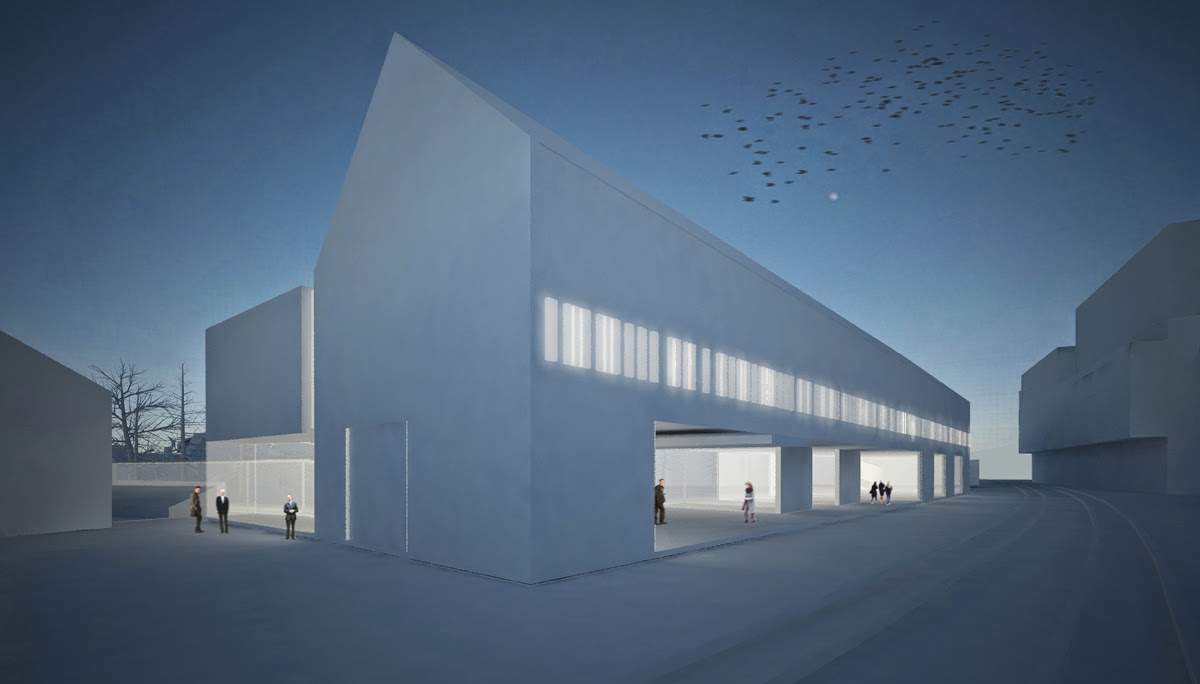 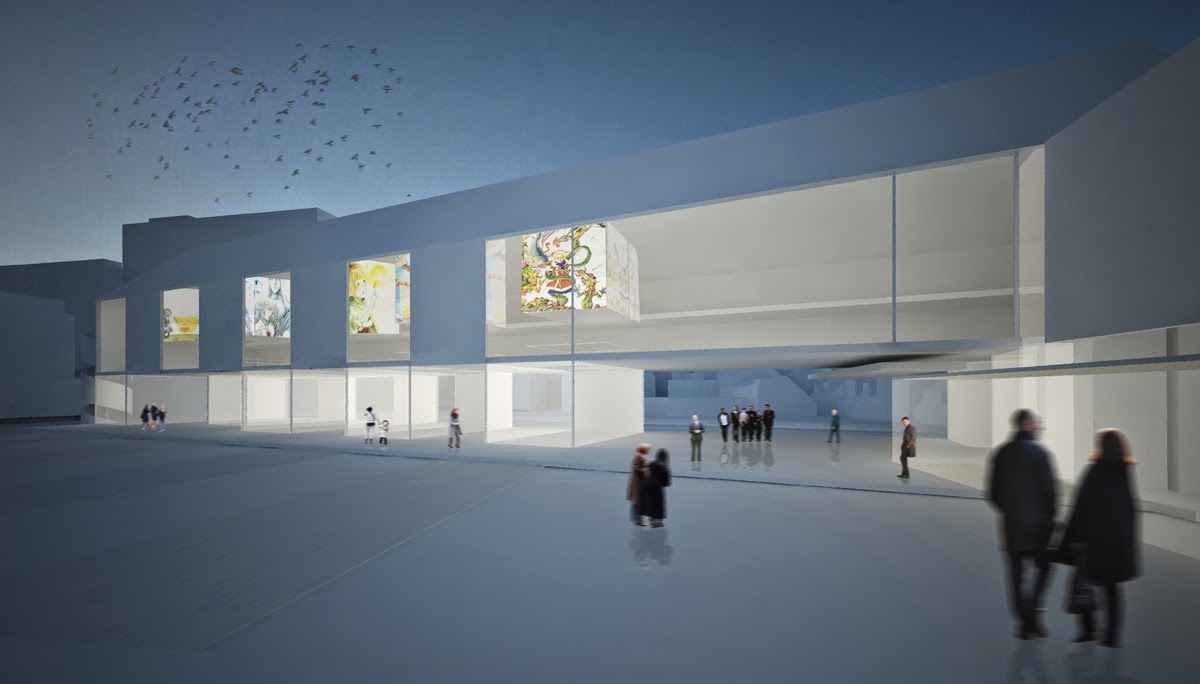 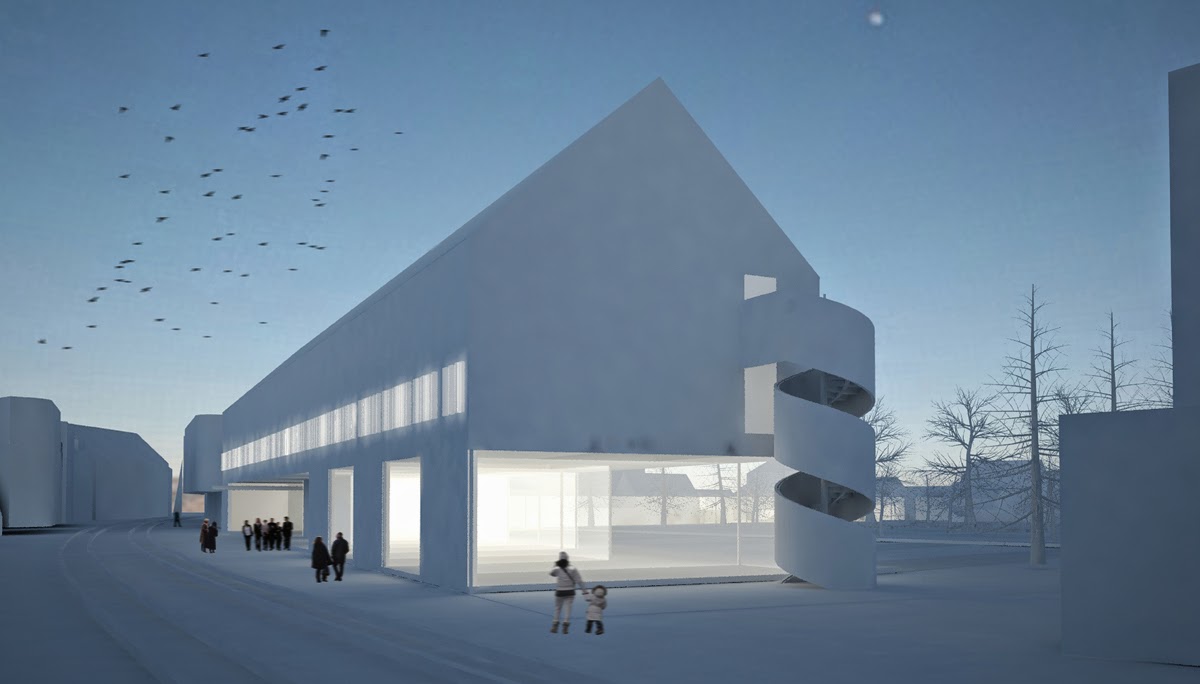 In particular:
i. ‘The ugly duckling’ is talking about our difficulty in accepting the ‘different one’. The ‘ugly duckling’ stands for all these people who do not belong to our community and who are treated as ‘strange or unpleasant’. Andersen is trying to show that whoever is categorized under these labels deserves our respect and support. Only if we reconsider our attitude towards whoever is not like us will we be able to recognize the ‘exotic’ beauty often hidden behind difference. We should always remember Andersen's ‘ugly duckling’ when we associate with immigrants who have arrived in our society from distant countries. The first ‘Lifetale’ space is dedicated to immigrants and functions as a center for the integration of immigrant children. This particular space can host various educational programs addressed to prekindergarten and elementary school children in order to reduce the disparities between the children of Denmark-born parents and their immigrant counterparts.
ii. In ‘The snow queen’Andersen presents Kai, a little boy who becomes cruel and aggressive ‘loosing’ himself and ‘forgetting’his relatives and beloved ones when splinters of a troll-mirror penetrate his heart. Gerda's love and dedication helps him overcome his loss and find his true self again. We can associate Kai's case with mental illness. Mentally ill people are not ‘bad’or ‘cruel’by nature. Inspired by Andersen's ‘Snow Queen’we can treat mentally ill people with care and affection understanding that they are in fact more fragile and ‘lost’ than we are. Therefore the second ‘Lifetale’ space hosts a youth mental illness center of support. A center where professionals identify
the early warning signs of mental illnesses in children and adolescents, discuss the specific, age-related symptoms of mental illnesses in youth, suggest how best to intervene, and share the lived experiences of individuals and families.
iii. In ‘The little girl with the matches’ Andersen is talking to us about all these people who are left, in some state of their lives, without means, support, protection or security. A full-day kindergarten for poor children is the third‘Lifetale’ space. A place that boosts poor children’s cognitive learning, creative problem-solving and social competence while at the same time helps them integrate within society.
iv. ‘The steadfast tin soldier’ had a mishap and this led to his rejection, in relation to his other comrades, as being useless. Nowadays his rejection sounds cruel and inhuman. But even if contemporary societies have done a lot for people with disabilities, there is much more to do. A wheelchair and scooter service area is located at the fourth ‘Lifetale’ space. This is a place where people with disabilities can find assistance with impaired mobility, from walking sticks and crutches to wheelchairs, walkers and electric scooters, or service on cushions and padding, joysticks and controllers, motors and tires.
v. ‘The girl who trod on the loaf’ is all about Inger, a spoiled girl with a bad and cruel disposition. In Andersen's tale the selfish and arrogant girl is imprisoned under the mud as a punishment for her actions. Inger is finally liberated from her prison when an old good woman feels sorry for her and cries over her misfortune. Inspired by this particular tale we can reconsider the way our society deals with young people who violate the law. The fifth ‘Lifetale’ space hosts a rehabilitation center for juvenile offenders. In this center alternatives to incarceration are developed and implemented, such as a variety of programs for angermanagement, self-esteem, etc..

THE HOUSE ITSELF
The museum is placed along the current Thomas B Thriges Gade. It stands at the edge between the city and the enclosed Lotze’s garden while being porous at the same time. The building respects the urban structure, proposing a front in a continuity of the older buildings while at the same time remains open to the city offering a direct access to the garden behind it. The entrance is placed in a new prismatic building, between the museum building and the existing adjacent houses. When entering, one can choose to be directed either upstairs, towards the new museum, or turn eastwards, towards the Andersen’s birthplace and memorial hall. Τhe museum building reinterprets the typology of the older buildings of the area with their simple volumes and pitched roofs. The stretching of the volume and the difference in scale produces a building which refers to a typical danish house but alters its shape creating a house which is quite different from the others, a ‘house which is not a home’. On the ground level one can see the five ‘Lifetale’ spaces enclosed in prismatic glass volumes. These transparent boxes remain open to the city and the local community, constantly transmitting their humanistic message. These five glass boxes, the ‘Lifetale spaces’ form the base of the museum as if the real world supported the world of the fictional stories highlighting their deeper meaning. In the higher level one finds the main exhibition areas of the museum organized around the five ’Fairytale’ spaces. Each ‘Fairytale’ space is connected with its relevant ‘Lifetale’ space through an open atrium. This particular architectural structure helps visitors associate the content of each story with a present-day tangible experience. This loop between the real and the imaginative is what makes the museum one of its kind by paying homage to Andersen’s world in the most radical way.

THE GARDEN OF FAIRYTALES
The ‘Fairytale Garden’ is developed in three distinct areas. The one closer to the museum, is the ‘Crop fields’ area.Wheat, barley, oats, rye, and flax mini fields are placed in parallel strips narrating the story of the rich agricultural past and present of the danish society. The contribution of all these earth’s products to the economy, is linked to the identity of the city and is also highlighted as an aspect of Andersen’s epoch. The second area is the ‘Productive green playground’ a sum of nine circular allotment gardens where visitors learn how to plant and grow crops, cultivate and maintain a garden, collect various fruits and vegetables. In this way the garden is not just something pleasing to the eye but a whole educative laboratory, an agricultural park that communicates what the earth herself can offer if we treat her in a respectful and responsible way. The last part is where the ‘fairy-trees’ are. An array of big spruces, beeches, pines and oaks placed at the perimeter of Lotze’s garden each one connected with one of Andersen’s fairytales.